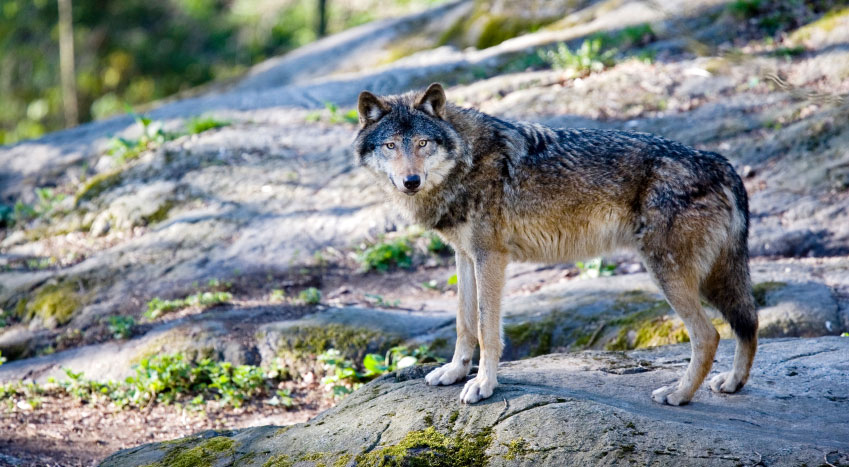 Over 100 years ago, it was believed that wolves had completely disappeared from the Adirondacks. In 2002, an animal was killed by a hunter who thought he had shot a coyote, but testing showed that the animal was not a coyote but, in fact, a pure gray wolf! The hunter reported seeing another animal with the one he shot and believed it to have been a female gray wolf. Reports of sightings have been scattered and it is still unknown whether any wolves currently exist in Adirondack Park.

Resembling German shepherds or malamutes, wolves are modern dog’s ancestor. Classified as Canus lupus, there are 39 recognized subspecies. They survive in a wide variety of habitats, ranging from arctic tundra to savannah to mixed forest, and before becoming endangered, wolves were found throughout the world, including regions of North America (including the Gray Wolf in the Adirondacks), Europe and Asia. Today, the typical natural North American wolf habitat is the frozen northern tundra.

Wolves prefer to live in packs of about four to seven animals. Wolf packs are made up of a mother and father, the alpha wolves, and their pups, as well as younger, subordinate wolves. The alpha wolves are the hunters and are also the ones who select the pack’s territory. Wolves have deep familial bonds and social structure and they have been known to sacrifice themselves to protect others in their packs.

A wolf’s natural diet is large, hoofed mammals such as deer, elk, moose and caribou and smaller animals such as beavers or rabbits. They are also sometimes scavengers and will eat animals that have died from injury or other natural causes.

There have been many sightings of wolves in New York State and in the Adirondacks that turn out to be coyotes rather than a wolf.  Coyotes and wolves share some similarities that often lead to misidentifications, but the two creatures have many distinct differences: 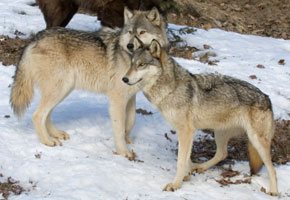 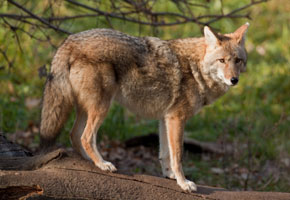 Wolves and coyotes can mate and produce hybrid offspring. The animal is called a “coywolf,” pronounced “coy” as in shy and playful. They are also called “coydogs” and “eastern coyotes.” The hybrid is born from the mating of a female coyote and male wolf. Unlike many other hybrid species, coywolves are fertile, and they can also interbreed with both coyotes and wolves. If you have seen an animal that is larger than a coyote and smaller than a wolf, then you have likely seen a coywolf.

Pros and Cons of Wolves in the Adirondacks

As you probably know, there has been plenty of discussion about reintroducing wolves into the Adirondacks. It’s a tricky subject, with valid arguments on both sides. The arguments for reintroduction are:

Arguments Against the Reintroduction of Wolf Populations:

Red wolves (Canis rufus) were considered a candidate for re-population, in the 1987, red wolves introduced to the Alligator River National Wildlife Refuge in eastern North Carolina. Unfortunately, in the ten years that followed, a study showed that significant portion of them had bred with coyotes. Scientists became concerned that because of this interbreeding, the wolves might cease to exist as a distinct species, negating their good willed intentions.

Gray Wolf (Canis lupus) and the Eastern Timber Wolf (a sub-species of the Gray Wolf), is the largest of the wolf species found in North America. Currently the Gray Wolf only occupies about 3 percent of the territory it once did, and interest has been show in increasing their populations.  In the late 1990’s a study by The Adirondack Park Citizens Action Committee organized by the Defenders of Wildlife1, examined the recovery of the gray wolf in the Adirondack Park.  Their study pointed to the resiliency of the Gray Wolf, and that re-introduction would work however human influence would play a disrupting role that would have negative effects.

Why Would Anyone Oppose Wolf Reintroduction?

There is still debate over which wolves originally populated the Adirondacks. Concern also remains about interbreeding between coyotes and other species which are already populating the area. Arguments have been raised about the safety of hikers, campers, livestock and domestic animals. Some of the groups that oppose wolf reintroduction are:

Wolves have long been featured players in legends. Although they are often portrayed as evil, as in “The Boy Who Cried Wolf” or “Little Red Riding Hood,” and stories of werewolfs (lycanthropes) fill many novels and stories and depictions in ancient mythology.  There are many other cultures especially Native Americans (and a few Twilight fans), that have found strength and wisdom in the nobility of wolves. Skilled and intelligent hunters, wolves have living patterns similar to humans. They live in family units and take care of their pups, teaching them how to hunt and survive in the world. Cultures whose lifestyle centered around hunting identified with the wolf.  It wasn’t until agriculture took over that the wolf became a symbol of evil as the animal was seen as a threat to the new way of life.

What is your Opinion?

Let us know your thoughts.  Should the wolf be re-introduced to the Adirondacks? Leave your comments below.

3 Replies to “Wolves in the Adirondacks”