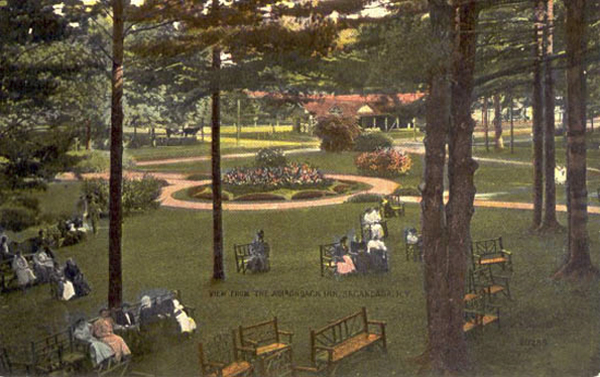 The word “Sacandaga” derives from the language of the Mohawk peoples meaning “the land of waving grass” – ironic when weighed against the fact that the whole region, in prehistoric times, was once beneath the ocean.

Apart from the indigenous tribes that inhabited the land, the area that eventually became known as the Sacandaga Valley was originally settled by the Irish and Scotts in the 17th century.  In fact the town of Johnstown, one of the many communities bordering the Great Sacandaga Lake, owes its name to the Irish immigrant and merchant Sir William Johnson, who first settled the land in 1738.

Before it became a lake, Sacandaga Park – called the “Coney Island of the North” – saw the 1888 construction of the Adirondack Inn, a theatre, golf course, and various widely-visited attractions including the Sport Island Complex, once home to the New York State Baseball League!

In its heyday, Sacandaga Park was the place to be in upstate New York for folks who wanted to get away from the crowded city!  Sadly, its popularity dwindled over the years, and several fires claimed its many once-popular attractions.  The Park was finally condemned in 1926 to make way for what would become the Great Sacandaga Lake.