March 17th is St. Patrick’s Day, the traditional Irish feast day which celebrates the anniversary of the death of St. Patrick, a fifth-century missionary (thought to be of English and possibly Scottish descent) who is responsible for the conversion of many pagan habitants of island we know as Ireland to Christianity.

This feast day falls during the middle of the season of Lent, which prohibits eating meat, but because of the anniversary of St. Patrick’s death, the restrictions were lifted, and a celebration of dancing, drinking and consuming the traditional meal of cabbage and Irish bacon (not corned beef) was born.

Most of us these days don’t get too caught up in the historical or religious significance of St. Patrick’s Day, but enjoy the fun side of things and the celebration of the rich heritage of the Irish people (and the beer). Even if you’re not Irish, St. Patrick’s Day somehow gets everyone in the mood to celebrate the day. There are few holidays besides Cinco de Mayo and Mardi Gras and maybe New Year’s Eve that really have such a big celebration and drinking component to them, which is probably why many have no qualms celebrating whether their Irish or not. 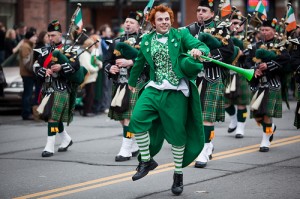 Yes, every year you turn on the TV and there it is. This parade is one of the oldest parades that we celebrate, dating way back to 1762 when Irish solders in the English military marched through NYC to keep them connected to their Irish roots. This parade is celebrated in more than a dozen major city centers around the world, especially those with a large population of Irish, most notable are Dublin, NYC, Birmingham England and of course a city that most American consider synonymous with Irish, Boston.

You see shamrocks everywhere this time of year, nothing says St. Patrick’s Day like a shamrock, but most people aren’t aware that the roots of the shamrock’s significance leads back to a legend that St. Patrick used the 3 leafs of the shamrock as a visual representation of holy trinity (Father, Son & Holy Spirit) when teaching about Christianity. Later on when the English began their campaign of oppression and suppression of Irish heritage across Ireland, the shamrock became an Irish symbol of nationalism

In Irish folklore, the leprechaun is a type of fairy fabled to be mischievous in nature, and full of trickery who were no bigger than a small child. These Leprechauns would spend the majority of their time making and repairing shoes for the other fairies, taking their payments of gold and storing them away in their hidden pot of gold, which is supposed to be found at the end of a rainbow.

The traditional meal of the Irish on St. Patrick’s Day was actually Irish bacon (like Canadian bacon) and cabbage, but when the Irish began their emigration to America to flee from the potato famine during the mid 1800’s, they arrived very poor. In 1847 alone, over 37,000 Irish Catholics arrived to the city of Boston, which at the time a population of only 115,000.This huge population boom was a big burden for the city and employment for the Irish was difficult to come by. Since the traditional meat portion of the meal, Irish bacon, was far too expensive for the poor Irish immigrants, a traditional Jewish food, corned beef was substituted for its low cost.

If you’re feeling hungry now, our area has many corned beef and cabbage dinners ready to be eaten, look no further than your churches, community centers, firehouses, and local bars, pubs and restaurants. Oh, and if you like corn, there isn’t any corn in corned beef, if is only a reference to the “Corns” of salt used to cure the meat.

We wish you all a very Happy St. Patrick’s Day, go out and support your local charities and businesses that are offering up food, fun and drink, take a taxi and drink some Guinness for all of us here at Sacandagalife.com. Don’t forget to take a look at our calendar of events for things happening around the area, if you have something going on, please list your event for all of us to enjoy.