In the Adirondacks, as with many forested regions of the country, nothing can spoil outdoor fun like the onslaught of biting insects.  In our region, mosquitoes and black flies are a particular scourge because of our abundance of water, woodland areas and warm temperatures.

The largest health risk associated with mosquitoes and Black Flies is, of course, the spread of diseases like malaria, but luckily our area is not a hotbed for such diseases, so more to the point, they are a nuisance like no other!  So here we explore some facts as well as some tips and tricks to help keep these little demons from ruining your outdoor festivities.

A little-known factoid here: in the case of both mosquitoes and Black Flies, it is the female of the species – and not the males – that feed on blood (there is no metaphor here, this is just a science fact).  Male Black Flies and mosquitoes alike feed simply on nectar and plant juices. 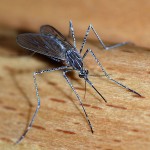 Mosquito season in the Adirondacks begins pretty much as soon as the temperatures start to rise in the spring (mosquitoes can and do hibernate through winter).  Mosquitoes are attracted by the smell of carbon dioxide found in a person’s breath, sweat and body odor.  Thus, a freshly showered individual is likely to be a less attractive target.

Did you know?  The mosquito is one of the oldest forms of life on the planet!  There are about 3,500 species of mosquitoes known to exist in the world.  Surprisingly, not all of them feed on humans – very few of them in fact.  But of those that do, they are what are called “vector agents” because they can carry disease-causing viruses and parasites from person to person without catching the disease themselves.  Of the diseases transmitted by mosquitoes, yellow fever and malaria are most common as well as West Nile Virus. 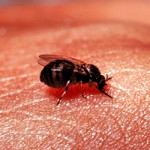 Black Fly season in the Adirondacks tends to begin early-to-mid-May but can get started as early as late April depending on temperatures.  The largest risk associated with Black Flies has to do with their numbers.  While here in the United States the health risks of a Black Fly bite are not as significant as, say, the mosquito, the bites are painful and, where there is one there are likely to be many others – the little buggars are relentless!

The black flies of the Adirondacks are infamous, and some people believe that they possibly should replace the Eastern Bluebird as the state bird. If you plan on hiking in the Adirondacks during late spring or early summer, especially on a long hike like the Northville-Placid Trail, you will definitely earn your merit badge in Black Fly, so don’t forget to bring the right gear, especially a head net and some repellent.

Black Fly Deaths? Deaths reported in the United States associated with the Black Fly are most often attributed to severe allergic reaction – which is rare – but have also been reported to have been due blood loss from numerous bites and even inhalation of overwhelming numbers of flies (caused when an unsuspecting person happens upon a large swarm).

There are some 250 species of Black Fly found in North America!  Like the mosquito, this little bloodsucker is drawn by the smell of exhaled carbon dioxide.  It is known to travel up to 10 miles from its breeding ground in search of a meal, and is most attracted to the head area of its host. 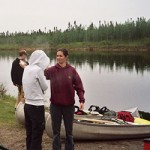 So how can we prevent these little demons from ruining our spring & summertime fun?  What follows is an exploration of some of the more common measures used to keep these bloodsuckers at bay.

Treating the area that you congregate most outdoors with repellents can be an effective black fly and mosquito control measure.  Here’s a nifty trick we read about once, actually tested a couple years ago, and have had good results with.  If you combine flat beer with equal parts antiseptic mouthwash and Epsom salt, spray it around the area where you congregate with friends and family, say around the back deck or patio, or if you’re camping, spray around your camp site, it makes a surprisingly effective mosquito repellent.  You can use a garden sprayer attached to a hose or a simple spray bottle.  The upside here is that it is of course all natural and contains no harsh chemicals, making it a safer – and cheaper – alternative to other commercial repellents.

There a number of steps you can take to reduce your appeal to biting insects.  One measure doesn’t involve chemicals or repellents at all; rather, the clothes you wear.  A little-known fact here: biting insects are attracted to dark colors.  So wearing light-colored clothing can go a long way to keeping the critters at bay.

Standing water creates the perfect breeding ground for mosquitoes.  Old buckets, yard art, and just plain junk around the yard can collect water, especially rain barrels.  Make sure you have all rain barrels covered, there are special tops created with screens that let water enter but keep mosquitoes out.  Eliminate deep wells in your yard or near your house where rainwater can collect or level out spots in your driveway or walkways that create puddles.

For keeping away mosquitoes, where chemical remedies are concerned there is the typical choice, DEET, found in most leading brands of repellents.  Evidence suggests, however, that DEET is much less effective against Black Flies – in fact some have reported that it actually seems to attract them.  Probably your best preventative measure against Black Flies is light-colored clothing, covering as much of the skin as possible, and in areas particularly infested, the used of head nets.

Also, the drawbacks of DEET are noteworthy.  Symptoms reported in rare cases have included fatigue, headaches, dizziness, confusion, loss of muscle control, memory loss, and muscle and joint pain and even seizures (there also have been 4 recorded deaths in North America).  Not to mention the most common side effect; skin irritation.  Experts recommend using products that contain only 50% DEET mixtures or less, and avoid using on areas of the skin if possible, especially if that are to be covered by clothing anyhow, on wounds or previously irritated skin.  If you do apply to the skin, be sure to wash off the skin once you have returned indoors.

DEET is not recommended for children under the age of 2 and especially not to be used on infants.  A 10% concentration or less is suggested for children between the ages of 2-12 and should be used sparingly, less than 3 times per day.

Please review the information by the FDA about insect repellents and children.

Alternative repellents that have been shown to have fewer adverse effects, and to which the CDC has given its stamp of approval, include Picaridin, Oil of Lemon Eucalyptus (also called PMD  **NOT to be used on children under 3) and IR3535.  Again, with any repellent, you should take the time to review the risks vs. benefits to see if they are right for you.

There are, however, a number of home remedies that are safe, effective, can be made cheaply, and, depending on whom you ask, may be a better option.  Some of the more common home remedies include calamine lotion, Avon Skin-So-Soft and vinegar.  Biting insects also seem to be repelled by mint.  Many home remedies involve the use of fresh mint and peppermint oil for this reason.  While natural, most mint, pepermint oils etc. can irritate the eyes and nose, read up a bit on these remedies before you splash it on like Old Spice.

Here’s a recipe for a body mist that seems effective in keeping the little biters away. Mix witch hazel with a few drops of tea tree oil, lavender oil – lavender has been shown to be a highly effective mosquito repellent – and/or peppermint oil in a squirt bottle and mist all over your body and over your clothing before going outside. Naturalists have also suggested that dabbing a bit of pure vanilla extract on your wrists, neck and behind the ears is an effective repellent – as it turns out, the little buggars don’t like the smell. 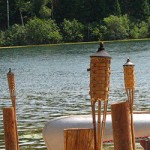 Citronella candles, Tiki-torches with Citronella oil and the actual citronella plant (as well as marigolds) planted around your yard can also help keep mosquitoes away from your family gatherings, picnics and after dark fun.  The Tiki-torches have that added benefit of adding ambiance, nothing says “Party” like Tikis, just be careful you don’t set your house or yourself on fire.

Most of us don’t care which product we use, as long as it is safe and works, anything is better than running around in circles flailing are arms around or smacking each other in the arm and fore-head all night.

If you have any good mosquito or black fly remedies or have a funny or interesting story, leave your comments below.