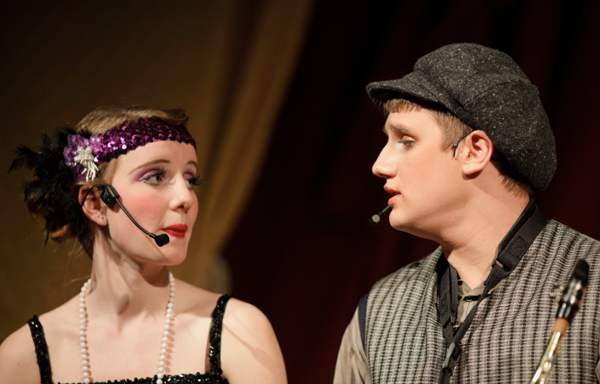 In part I of our local theater series, we showcased The Glove Theatre, and in continuation of local theater in the Sacandaga area, we thought we would start it off with a little comedy.

Since before the theatre of the Ancient Greeks, comedy has been entertaining people by making fun of everyday life events and mishaps, poking fun at politicians, roasting close friends, laughing at the quirks of  family members, and even helping us laugh at ourselves.

In the Sacandaga area we only need to take a short drive to experience a real comedy club.  The Funny Farm located at 320 Steele Avenue Extension in Gloversville, is home to some of the rip-roarin’-est, funniest comics from all around the region!  The club is also features a restaurant so you can stop in for dinner and a show!  Find out more about the Funny Farm Comedy Club and Restaurant call (518) 725-2200.

Moving over to Johnstown we find another local gem, the Colonial Little Theatre.  Founded in 1938, this theatre was formed by an amateur stage group and is one of the oldest community theatres in New York State – next to the Glove Theatre, of course.

“Over the past 73 years, over one thousand performers have graced the stage at the CLT,” boasts the theatre’s website, “and many of them have gone on to pursue successful professional careers in the performing arts. What began as a small amateur community theatre group has evolved into a staple of the community as a forum for some of the best theatre in the area.”

For more information about Colonial Little Theatre, visit them online (http://www.coloniallittletheatre.org) or call (518) 762-4325.

Traveling a bit further, Saratoga Springs brings us the Spa Little Theater, home to Homemade Theater, a not-for-profit theater company “committed to enhancing the cultural life of the Saratoga region.”  Though not as old as the others we’ve highlighted so far, this troop is among the most celebrated in the region.

The Homemade Theater Company began life in 1985 in residence at Saratoga’s Caffe Lena, which sports a 55-seat theatre venue, but moved to the larger Spa Little Theatre just a year later.  Today the company enjoys widespread popularity for the quality of its shows and all that the troop has to offer beyond, such as classes and workshops for youth and aspiring actors.

Since its beginning, Homemade Theater has put on such popular productions as On Golden Pond, Dial “M” For Murder, The Miracle Worker, One Flew Over The Cuckoo’s Nest, A Streetcar Named Desire, The Diary of Anne Frank, To Kill A Mockingbird, and Alice In Wonderland, just to name a few.

For more information about Homemade Theater at Spa Little Theater, visit them on the web (http://www.homemadetheater.org) or call (518) 587-4427.

One integral part of theater that we cannot ignore is the local school and community programs where the roots of theatre is planted.  In our local communities, our high Schools and Middle Schools have created such programs and clubs such as Play, Musical and Drama Club.  These programs are run by teachers who dedicate their time and experience to act as advisers ans directors or these programs.

Unfortunately, programs such as the arts and music are always under the knife when it comes to budget cuts, even though academic research show that students that participate in music based programs have higher math achievement levels.  We encourage all residents in the Sacandaga are to actively support your local school music and theatre programs, especially during times of budget cuts.