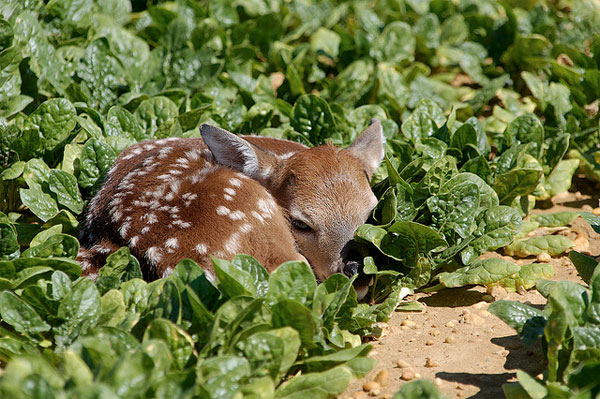 DEC Advises: Do Not Disturb Fawns and Other Young Wildlife

The New York State Department of Environmental Conservation (DEC) today reminded New Yorkers to keep their distance and not to disturb newborn fawns or other young wildlife as many animals are in the peak season for giving birth or hatching young.

Finding a fawn deer lying by itself is fairly common. Many people assume that young wildlife found alone are abandoned, helpless and need assistance for their survival. In nearly all cases this is a mistake, and typically human interaction does more damage than good. If you see a fawn or other newborn wildlife, enjoy your encounter, but for the sake of their well being, it is important to keep it brief and maintain some distance.

Young wildlife quickly venture into the world on shaky legs or fragile wings. While most are learning survival from one or both parents, some normally receive little or no parental care. Often, wild animal parents stay away from their young when people are near. For all of these young animals, the perils of survival are a natural part of life in the wild. Some will not survive. However, young wildlife that learn these important survival skills are the most fit and usually live the longest.

White-tailed deer fawns present a good example of how human intervention with young wildlife can be problematic. Most fawns are born during late May and early June. While fawns are able to walk shortly after birth, they spend most of their first several days lying still. During this period a fawn is also usually left alone by its mother except when nursing. People do occasionally find a lone fawn and mistakenly assume it has been orphaned or abandoned, which is very rare. In such a case, fawns should not be picked up. In fact, if human presence is detected by the doe, the doe will delay its next visit to nurse. Human scent can also put the fawn at risk by attracting predators to the site.

A fawn’s best chance to survive lies in being raised by its mother. Fawns nurse three to four times a day, usually for less than 30 minutes at a time, but otherwise the doe keeps her distance. This helps reduce the chances that she will attract a predator to the fawn. The fawn’s protective coloration, near lack of scent and ability to remain motionless all help it avoid detection by predators and people.

By the end of its second week, a fawn begins to move about more and spend more time with its mother. It also begins to eat grass and leaves. At about ten weeks of age, fawns are no longer dependent on milk, although they continue to nurse occasionally into the fall. During August, all deer begin to grow their winter coat and fawns lose their spots during this process.

Should you find a fawn or other young wildlife, If You Care, Leave It There. It may be difficult to do, but this is the real act of kindness and in nearly all cases that is the best thing to do. DO NOT consider young wildlife as possible pets. This is illegal and harmful to the animal. Wild animals do not make good pets; they are not well suited for life in captivity and they may carry diseases that can be given to people. Resist the temptation to take them out of the wild.

For more information and answers to frequently asked questions about young wildlife, visit the DEC website at: http://www.dec.ny.gov/animals/6956.html.