There are many gems in the crown of the Adirondacks but one of the brightest – in our humble opinion – is the Great Sacandaga Lake.

‘Coney Island of the North’

Long before it was a lake, the Sacandaga was a lush valley, home to the indigenous Mohawk peoples.  It is from their language that the word “Sacandaga” derives, meaning “the land of waving grass.”

The Sacandaga River are was widely visited and utilized, especially by industrialists who tapped into the wealth of timber that the Adirondacks had to offer.  Local logging companies used the Sacandaga River to transport their logs, and these “river drives” were a local spectacle as a flood of timber made its way to market.

In the 19th century, Sacandaga Valley became home to Sacandaga Park.  It became such a tourist attraction in fact that it came to be called the “Coney Island of the North.”  The year 1888 saw the construction of the Adirondack Inn, a theatre, a golf course, and various widely visited attractions including the Sport Island Complex, once home to the New York State Baseball League!

In its heyday, Sacandaga Park was the place to go in the Adirondacks if you wanted to get away from the crowded city!  But its popularity dwindled over the years, and several fires claimed its many once-popular attractions.  The Park was finally condemned in 1926 to make way for what would become the Great Sacandaga Lake.

Though Sacandaga Park was a popular tourist destination in the Northeast, farther down the Sacandaga and Hudson Rivers, life was subject to frequent upheaval.  From the days of the earliest settlers, spring runoff caused devastating flooding in the communities along the rivers as far south as Albany.  In March 1913 the river waters rose a record 28 feet above sea level inundating both downtown Albany and neighboring Troy.

The seasonal floods were catastrophic for local businesses in the flood zones.  Building a dam on the Sacandaga River had been proposed many times during the late 19th century.  But it wasn’t until Albany and neighboring Troy had been hit more than once that it was finally decided something had to be done.  At the urging of local residents and businesses, state authorities established a public benefit corporation in 1924 to study flood control options.

Later that year, the organization proposed the building of the Conklingville Dam in the town of Hadley.  The plan would involve flooding the Sacandaga Valley in order to hold back spring runoff and floodwaters, which could then be dispersed slowly throughout the year.  The plan would stop the floods downriver and provide a steady source of water for farmers and businesses along the river year ‘round.

In 1927 the immense project began. It was completed in 1930, destroying homes and farms in Mayfield, Northville, Day, West Day, Fish House, Batchellerville, Cranberry Creek, Conklinville, Benedict, Osborne, and Sacandaga Park.  You can view the original reservoir plans, which are archived by New York State.  The total cost of construction was $12 Million.  Surprisingly, no state or federal funds were used for the project – funding was provided entirely by local businesses that benefited from the flood control.

The resulting transformation created what is today the Great Sacandaga Lake.

Today, the Great Sacandaga Lake stretches 29 miles in length, covers 41.7 square miles at capacity, and spans the counties of Fulton, Saratoga and Hamilton.  In addition, the lake boasts 125 miles of shoreline.

Like Sacandaga Park before it, the Great Sacandaga Lake area is a must-see tourist destination for anyone looking to get away from the hustle and bustle of the city!  Both local residents and people from all over the state and country come to visit the lake for recreation, enjoy nature or to stay in their summer camps & seasonal homes on the lake.  Boasting year-round seasonal sport activities from boating and fishing in the summer to skiing and snowboarding in the winter, hundreds of shops, boutiques, restaurants and museums, the Sacandaga area offers the very best the Adirondacks has to offer! Take a look at Things To Do page to plan your next trip, as well as our Sacandaga events calendar.

The public has access to the lake through the use of many public boat launches, public beaches and campgrounds that are located on the shores of the lake.  Use of the land surrounding the lake, business interests and environmental issues are overseen by a Lake permit system which policies are carefully watched by the Sacandaga Protection Committee.

The lake is home to many varieties of fish including walleye, northern pike, trout, bass and more, all of which lures fisherman from around the country for the excellent lake fishing conditions.  The lake is carefully monitored and stocked by the Great Sacandaga Lake Fisheries Foundation or GSLFF.

Facts about the Great Sacandaga Lake 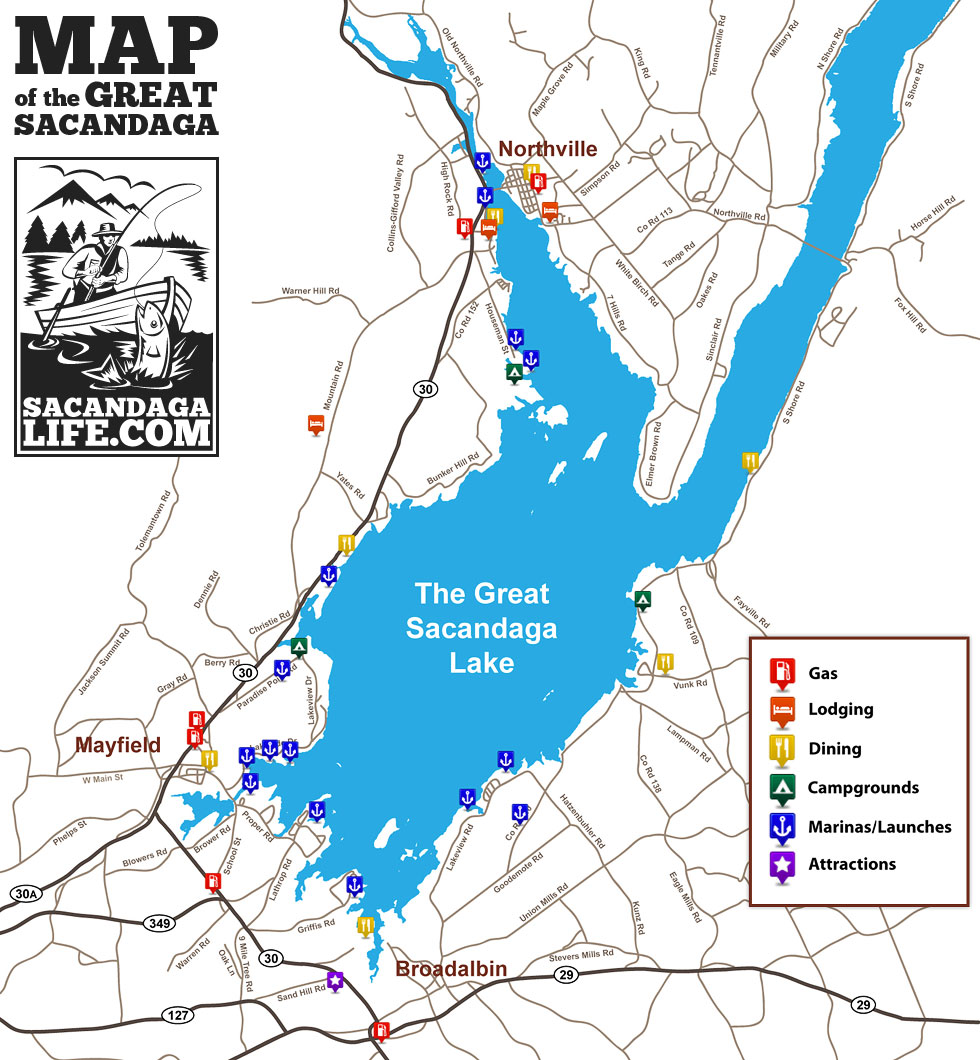 Keep coming back for timely articles, glimpses into the history and heritage of the region, and explore the many area-specific guides and profiles that highlight all that makes the communities of the Great Sacandaga Lake area so very special!