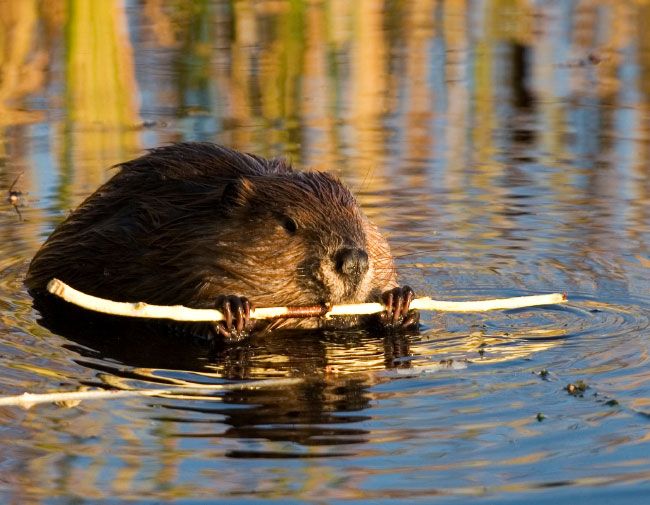 Perhaps among the most iconic mammals in the Northeast, famous for its ecological impact, uniquely identifying features, and its characteristic habitat, is the North American Beaver – the official state animal of New York!  It is estimated by the NYS D.E.C. that there are between 50,000-75,000 beavers in the Adirondacks, a number which has grown significantly from the pioneering days when Dutch fur traders in the 1600’s and unregulated trapping through to the early 1900’s nearly decimated the population.

Adult beavers (scientific name, Castor Canadensis) can reach 25-35 inches in length, weigh up to 65 pounds, and have, of course, broad, flattened, paddle-shaped tails which average 6 inches wide by 9-to-15 inches long. Other characteristic features are its opaque inner eyelid, called a nictitating membrane, ears and nose that close automatically underwater, and lips that close behind its incisors (front teeth), which allows the beaver to cut and gnaw while submerged.  Their incredibly dense fur ranges in color from yellow- to dark-brown.

The beaver’s most famous feature, its tail, is used primarily to navigate in the water, though it does come in handy for regulating the animal’s internal temperature as well as aid in fat storage.

Because they move slowly on dry land, they can be susceptible to predators such as coyotes, bears, including the black bear, and bobcats.  Thus, beavers spend most of their lives in the water, rarely leaving their aquatic habitats for dry land for any extended period of time.

Beavers can be found inhabiting wooded streams, lakes shores, ponds, swamps and marshes.  Ideal habitats will have an abundance of aspen, willow or alder, and a diversity of other woody and herbaceous vegetation.

What do Beavers Eat? 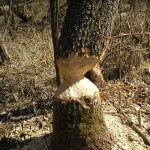 The beaver’s diet consists almost entirely of woody plant material, mainly bark, though perhaps not surprisingly the wood is indigestible to them (as to most mammals).  So to aid digestion, beavers have microorganisms living in their small intestine that cause the wood to ferment, making the beaver able to absorb its nutrients.

During summer months, their diets often shift from woody plants to aquatic vegetation, including water lilies and the rootstalks of shoreline ferns.

Animal Engineers of the Adirondacks

Beavers are actually considered rodents.  And like some other rodents, the beaver’s home is an elaborate construct with multiple entrances called a “den” or “lodge”.  They differ however from other rodents by the fact that beavers alter their surroundings to suit their needs.

The Beaver possess the unique ability to cut down trees, a talent they use to great purpose, not only get food, but also as a source of construction material for their lodges and the watertight dams they build.  Their powerful jaws generate a force of over 175 pounds per square inch and their beveled edged incisors which continually grow, can cut through a 6 inch diameter tree in about 20 minutes depending on the species of tree.

Beavers build two types of lodges; the bank den and the mud and stick lodge. The bank den/lodge is constructed along steep banks along the lake or pond.  The Beaver simply digs a hole at or near the waterline on the bank of the water which leads to a den which opens up into a small chamber.  The beavers may cover the area with a mud and stick mound to further protect their habitat.

The mud and stick lodge is what most of us think of when we think of a beaver lodge.  These lodges are usually built on top of an island, sandbar or log or stump that is in the water away from the waters edge but still relatively close to the shore.  The beaver works diligently to build up the mud and stick mound then burrows out underwater passageway that serves as their entrance to the living chamber which is several inches above the waterline.

Why do beavers build dams?  The dams they are famous for building serve the purpose of “impounding” the area they intend to inhabit – providing housing and protection from predators.  It is believed that beavers are “cued” to build these dams at the sound of running water.

While many farmers, landowners and some hikers view beaver dams as destructive and a nuisance, beaver dams actually have a great benefit to many of the animals in the Adirondacks.  Beaver dams create aquatic habitats for fish, amphibians and reptiles, ducks and other waterfowl as well as water sources for local wildlife.  Beavers also provide great ecological benefits such as erosion prevention, increasing wetlands and land water absorption rates which help prevent flooding.

The beaver has received a bad name as the sole cause of Giardiasis, and intestinal illness caused by a microscopic parasite called Giardia Lamblia which causes diarrheal illness.  The Giardia parasite is spread when feces containing the parasite contaminates food or water and is consumed.  Beaver fever can be caused by any animal carrying the disease and even humans, and according to William Bemrick, a University of Minnesota researcher, muskrats and humans can spread the disease quite efficiently1.  In a wilderness setting (camping, hiking etc.) most people contract beaver fever by consuming surface water that is unknowingly contaminated near the source or “upstream”. Just because water looks clean does not mean it is not contaminated.  If you must source your water from a stream or body of water, use a water filter specifically designed to filter out harmful bacteria and parasites.

Did you know?  Beavers have waterproof fur, webbed hind feet and the ability to hold their breath for up to 15 minutes! A single beaver can chew down hundreds of trees each year, and a family of beavers can eat up to a ton of bark in a single winter!  They are active year-round and most likely to be seen early in the morning or at dusk.  In the winter, look for large holes in the ice on ponds that the beavers use to access the underwater entrance to their lodge.  If you’re going out beaver watching remember, they are shy creatures so approach carefully and stay hidden.