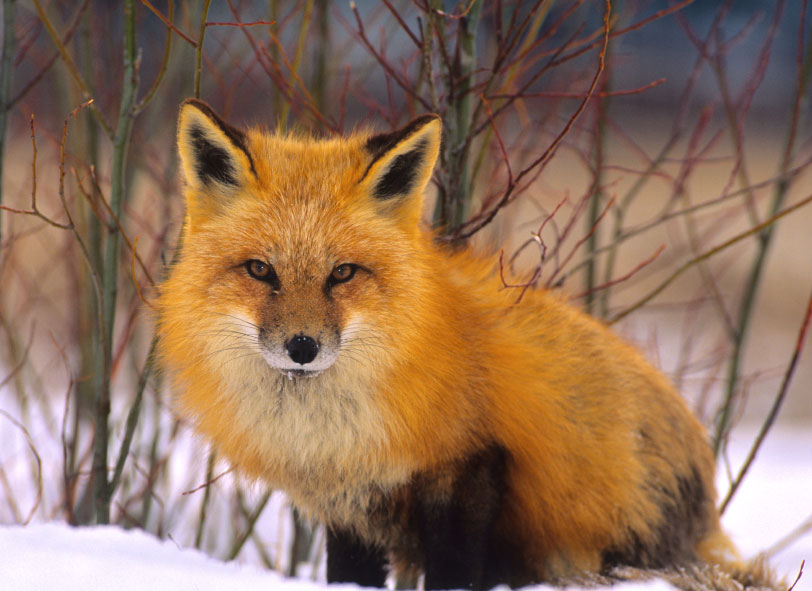 Ever wonder where the word “vixen” comes from?  In fact, a vixen is a female fox.  There are a few species of fox that call the Adirondacks home.  Among the most striking and visually recognizable however is the famous Red Fox (Vulpes vulpes).

Red foxes share a surprising trait with wolves in that they can be born in a variety of color variations, sometimes within the same litter.  They can range from the common reddish appearance, to brown, black or silver.

The average red fox weighs between 8 to 10 pounds and can get up to 3 feet in length, including the tail.  As with any number of species, males are generally larger than females.  Perhaps not surprisingly, northern foxes also tend to be larger than their southern counterparts.  This seems to be a product of their evolutionary development based on environment, the higher body mass index being necessary for survival in the harsh northern winter.

Red foxes, like many canines, are pack – or social – animals.  Their packs are led by a mated pair that seem to do most if not all of the breeding.  The offspring of the head mated pair generally make up the subordinate members of the pack, often remaining with their parents to assist in caring for new pups, called “kits”.

The red fox has an amazingly diverse appetite.  Called “omnivores” – meaning they pretty much eat anything – these canines feed on everything from small rodents, rabbits and hares, to game birds, reptiles, insects and even some young hoofed animals.  You can relax though; foxes have rarely been known to dine on people!  Being true omnivores, they have also been known to eat some fruits and vegetables on occasion.

Though a predator itself, the red fox does have a few natural enemies of it’s own.  Foxes tend to be vulnerable to attack from larger predators such as wolves, coyotes, jackals – not that we have many in the Northeast – and medium-to-large felines.

As beautiful and intriguing as these creatures are, the New York State Department of Environmental Conservation and the Adirondack Wildlife Preserve caution; DO NOT TOUCH THEM – even if it is an attempt to come to their aid.  Foxes are a “rabies-vector species,” meaning they are among those who, when they come in contact with a human, must be tested for rabies by law.  Sadly, the only way to test an animal for rabies is to euthanize it.  So if you encounter an injured animal in the wild and wish to help it, contact your local animal control or preserve.

If you would like to learn more about the animals that make our area so special, visit our Adirondack wildlife page.  Each week we will add new animals, insects, birds and other favorite critters.  If you have pictures or stories to share, please email us anytime at editor@sacandagalife.com.