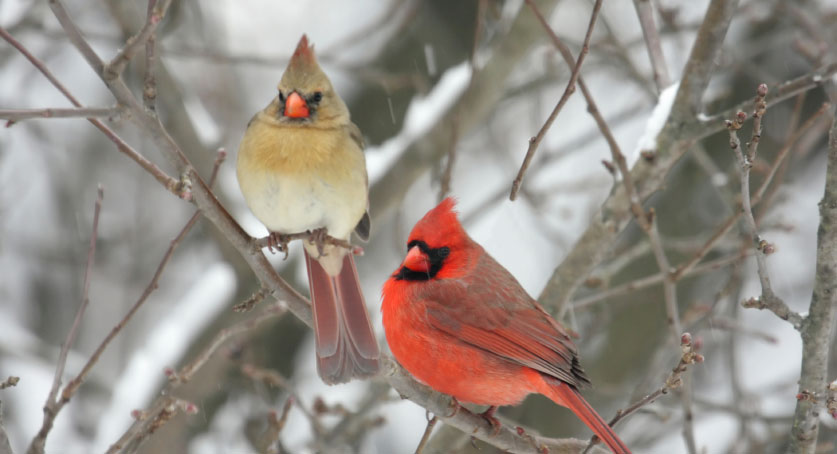 Perhaps one of the most sought-after visitors to our backyard bird feeders – especially in winter – is the Northern Cardinal (Cardinalis cardinalis).

The male cardinal is the larger and more “showy” of the species, sporting bright red plumage with black eyes and throat and featuring the ever-so-distinctive bright crimson crest on the top of his head.  Males grow to be about 8 1/2 inches tall.  Funnily enough, every year in the late summer males suffer their own brand “male pattern baldness” as they molt, losing every feather on their cap. Luckily however for this proud little guy, he grows his nice head of feathers back within a few weeks.

As is the way with most birds, the female cardinal is a bit less showy, featuring a more muted brownish-red plumage instead of the bright crimson featured by the male, but still a lovely specimen to see when bird watching.

Not typical of most birds however, cardinals mate for life.  And once mated, they tend to stick together.  It’s not at all unusual to spot a mated pair of northern cardinals at your backyard feeder.

Cardinals dine on everything from spiders and insects to fruits, berries, wild seeds and most of the staples at your bird feeder including suet.  Their favorite however seems to be just about any type of sunflower seed.  As with most birds, the right seed in your feeder is the key to attracting birds in winter.

The cardinal’s nest is generally a composite of roots, vines, twigs and tree bark.  Most often they’re found in dense hedges and thickets.  Their eggs are laid generally between mid-spring and mid-summer. The female may lay several clutches consisting of two to five eggs each during one season.

Because cardinals do not migrate, we are blessed to see them at our feeders, most delightfully in winter, when their plumage makes a spectacle against the snowy Adirondack landscape.  Their image and bright crimson plumage has found its way even into the décor of our holiday traditions.  And seeing the majesty of this winged critter, it is not at all hard to understand why!

Cardinals are just one of the many species of Adirondack wildlife you can experience when visiting and living in the Adirondacks.  If you have some great photos of a Northern Cardinal, or any other of our furry or feathery neighbors, email us your wildlife photos to photos@sacandagalife.com.